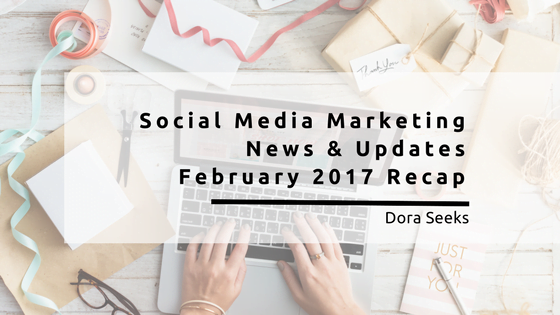 Find out what were the top Social Media Marketing News – February 2017 recap.

A list of the most important social media updates this month (scroll down for more):

Please include attribution to https://doraseeks.com/ with this graphic.

Find the report by clicking here.

On February 7th, Facebook announced that the registration for their annual Global Developer Conference is open.


Find out more about the Facebook developer conference here.

Find out more about the Facebook community help update here.

Last month Facebook made it clear that they care about diversity and will implement efforts to enforce and improve diversity with their ad policies. On February 8, Facebook announced the efforts they are making:

Read more about the ad policy and tools updates here.

On February 9th, Facebook announced a new partnership between GrowdTangle and Reddit. This new project will aim to further help publishers and journalists identify trending topics.

Find out more about the CrowdTangle – Reddit Partnership here.

On February 10th, Facebook announced that they will be improving the video ads objectives in the following aspects:

Find out more about the new Facebook Video Features here.

On February 16th, Facebook published 9 tips for publishing better 360 videos, based on insights from one year of 360 videos on Facebook.

On February 17th, in Facebook’s Developers blog were announced changes in the Messenger platform policies and an update on the review times.

Read more about the updated Messenger policies and the faster review times here.

On February 22nd, in Facebook’s engineering blog was published an article explaining the technology behind 360 video and it’s implementation.


Read all about the 360 Audio encoding and rendering technology here.

On February 7th, Twitter published an update on Safety. Three changes were announced:

On February 14th, Twitter announced that Periscope live videos will be showing up in top trends as trending content.

On February 22nd, Twitter announced a new feature in DM, called custom profiles. The new feature will allow businesses to emphasize the human element in DM and indicate when a bot is speaking.

Find out more about the personalized customer experience in Twitter Direct Messages here.

Surprise! ? Swipe left on the post above to see more. Starting today, you can share up to 10 photos and videos in one post on Instagram. With this update, you no longer have to choose the single best photo or video from an experience you want to remember. When uploading to your feed, you’ll see a new icon to select multiple photos and videos. It’s easy to control exactly how your post will look. You can tap and hold to change the order, apply a filter to everything at once or edit one by one. These posts have a single caption and are square-only for now. On a profile grid, you’ll notice the first photo or video of a post has a little icon, which means there’s more to see. And in feed, you’ll see blue dots at the bottom of these posts to let you know you can swipe to see more. You can like and comment on them just like a regular post. This update is available as part of Instagram version 10.9 for iOS in the Apple App Store and for Android on Google Play. To learn more, check out help.instagram.com.

On February 24th, Instagram announced that they have moved their business blog to https://business.instagram.com/blog/.

On February 8th it was reported that with the new Snapchat update, it is now possible to create a snap-able code for any website. Once someone scans it, it will open the website.

? In the latest @Snapchat update you can create a snap code for any website in settings. https://t.co/mybDR4jMfs pic.twitter.com/XY7K5AovDj

On February 20th, Snapchat announced that Spectacles are now available for purchase in the U.S.

Specs are now available in the U.S. at https://t.co/VrsiEv2fPY!!

On February 7th, YouTube announced that they are rolling out mobile live streaming to every YouTube creator with more than 10,000 subscribers!

On February 1st, LinkedIn started publishing videos aiming to show and educate LinkedIn users how to use the new design of the social network.

On February 3rd, LinkedIn published their LinkedIn Workforce report for the first time. This will be a monthly issue, aiming to help guide you during a job hunt. The report is available for the U.S. market only.

Find out more about the new LinkedIn content features here.

The new features for the LinkedIn Premium Career members  include personalized insights in LinkedIn Jobs. For example, it will show you jobs you are a top applicant for, companies that are growing quickly for professions like yours, and more.

The new Premium Business Insights feature will offer unique and timely data directly on the Company Pages of the organizations you are interested in and more.

On February 7th, Pinterest introduced exciting visual discovery tools. Check out the video below to get the idea of how it works:

What the new visual discovery tools let you do:

On February 15th, in Pinterest’s Engineering blog were announced some new open source tools. If you are a Pinterest engineer check them out here.

On February 16th, in Pinterest’s Engineering blog was published the science behind the automated human evaluation for Trending searches. Pinterest also shared their plans to make Trending searches even more personalized and timely in the feature.

On February 21st, Pinterest announced that promoted Pins are expanding to Ireland, Australia, and New Zealand.

and stay tuned for next month’s entry by following the social media channels of DoraSeeks or by subscribing!