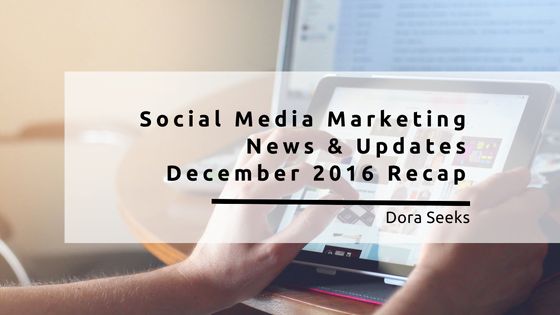 This blog post will be updated on a daily basis with the top Social Media Marketing News for December 2016. Stay tuned and thank you for reading!

A list of the most important social media updates this month (scroll down for more):

People can now go live with the 360 video format. Read more about this Facebook update here.

On December 13th, Facebook launched some new resources available for parents on Facebook. They are available at facebook.com/safety/parents.

An Update on Messanger’s Camera Features

On December 15th, Facebook announced some new features in the Messanger’s camera, including:

All about it can be found here.

On December 15th, Facebook announced their improved efforts regarding the rise of hoaxes and fake news on Facebook’s newsfeeds. To sum up, here are the areas they focus on:

The full news feed update can be read here.

On December 19th, Facebook introduced group video chats on Messagners. This new feature supports group chats of up to 50 people at once.

More about the feature you can find here.

Live audio broadcast will also be possible from now on. Unlike live video posts, live audio has the option to continue playing for the users even if they close the app and lock their phones.

Read more about the announcement from December 20th here.

On December 21st, Facebook introduced the following new features in the Mentions App:

Read more about them here.

We’re making it easier for you to share what’s happening in your world. Now you can #GoLive on Twitter!https://t.co/frWuHaPTFJ pic.twitter.com/Xpfpk1zWJV

Read more about it here.

Announcing The Most Retweeted Tweets of 2016

Check them out here:

And the most Retweeted Tweets of 2016 are from… ? #ThisHappened

Lead Generation Ads on Twitter will No Longer Be Available

Starting from February 1st, 2017 the creation of Lead Generation Ad campaigns will no longer be available. And from 1st of March it will not be possible to view Lead Generation Cards.

Find out more about this announcement here.

On December 6th, Instagram introduced their plans for the following features, aiming to increase safety and user control in the app:

Read more about this update here.

On December 14th, Instagram introduced saved posts. The feature is similar to the one on Facebook and you can access your saved posts from your profile.

On December 15th, Instagram announced that the platform users grew from 500 to 600 million just in the past 6 months. The full announcement is available here.

You might have noticed a slight change on both the organic and paid posts on Instagram recently. Discover all about it here.

On December 20th, the app was updated with new holiday stickers. Find out more about them here.

Group chat on snapchat gets a 10/10. Finally an update I can stand by, thank you @Snapchat

Group chats on Snapchat for up to 16 people will now be available. Read more about this new feature here.

Shazam is a popular music recognition app. In December, they collaborated with Snapchat & the Shazam feature is now available on Snapchat. More details can be found here.

Create Your Own Stickers

Users can now use scissors to cut out their own stickers from Snaps. Here is how it looks like.

Definitely can inspire some creativity.

As a tradition, at the end of every year, Youtube publishes a rewind video of the best & most important things that happened in the past 12 months. Check out #YouTubeRewind 2016 below:

YouTube Creators for Change is growing. Find out more about the new resources and ambassadors here.

As of December 6th, the acquisition is finally completed. Find out more here.

Ever felt like you need a topic to break the ice with a prospect on LinkedIn? They have got you covered. Similar to the Facebook messanger app ‘conversation topics’ you will now find personalized conversation starters in LinkedIn Messaging to help break the ice.

More about it can be found here.