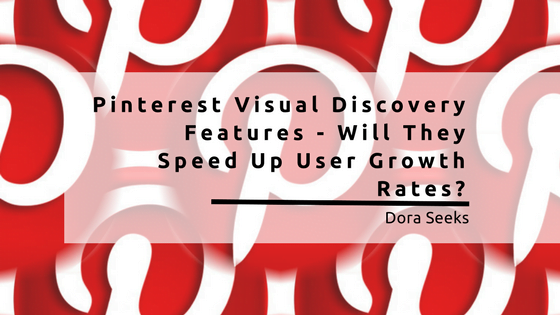 If you are in the marketing field, then you definitely have heard about the new rapidly developing Pinterest Visual Discovery Features.

You also might have heard that Pinterest’s user growth rate from 2015 to 2016 was the outstanding 50%.

That’s the same as Instagram’s growth rate for the same period.

Although the launch of Pinterest Lens did not get a ton of news coverage.

It still makes Pinterest the first social network to offer such a feature.

Many would say that Pinterest is not exactly a social network.

Even on their Wikipedia page they are listed as “Visual discovery, collection, and storage tool”.

So why does it always come up when someone talks about social media?

Because that’s how people use it.

People use it to collect and share ideas and stories with their friends, coworkers, families and strangers.

But that is definitely not all that it is.

Pinterest introduced a ton of new functionalities and features in the past few months.

And make no mistake.

You can bet they are already developing their own visual discovery tools.

But can Pinterest be the leader of visual discovery social media?

Can they continue their growth and expand to new markets?

And something as cool as Pinterest lens could be their opportunity to expand their younger user segement.

They need something new, exciting, fresh and undiscovered.

And that’s exactly what Pinterest’s Visual Discovery Tools are all about.

And young people is exactly what I think Pinterest is after.

Just look at their Instagram page. Those are not posts meant to be seen from 40+ moms with two kids working from home (which is how most people imagine the typical Pinner looks like).

So what do you think? Will Pinterest contain or even speed up its users growth rate in 2017?

I sure hope so!